After finishing the 1:48 longboat model from Model Shipways, I wanted to step up to a larger and more complex project, but it needed to be something I would have room for in a small apartment. After considering a number of options, I settled on Vanguard Models' 1:64 HMS Speedy. I'd read reviews of the kit, all of which praised the overall design, and of course the Speedy is a very attractive vessel in its own right. It is also a famous one, having made a name for itself under several extremely enterprising commanders at the end of the 18th and beginning of the 19th centuries. Its last and most famous commander, Thomas Cochrane, was one of the boldest, most successful and most colorful naval officers of his age, and his exploits in the Speedy provided the entire plot for Patrick O'Bryan's novel Master and Commander, the first of his long series of Aubrey/ Maturin stories. So there's a lot to like there!

The kit parts consist of laser cut MDF and pear wood, photo etched brass, and resin castings. The quality of the parts is excellent, and the instructions and plans are extensive. This is a double planked model, the first layer being done in lime wood, and the second in pear. But more on that later.

To start with, the mdf bulkheads and keel piece are assembled, building the skeleton of the model. I've used Elmers wood glue for this step, because it creates a strong bond, but gives you a little bit of working time. The laser cutting is well done, and the pieces fit together very neatly. 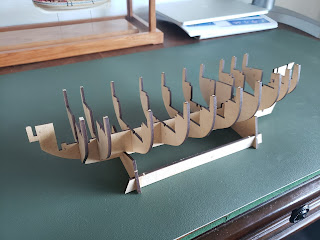 Next, the lower deck pieces are put in place. The lower deck sits at the correct scale distance below the upper deck, so if you wanted to go the extra mile and create a detailed interior, it would make that easier to do. But that's a bit beyond me at this point. 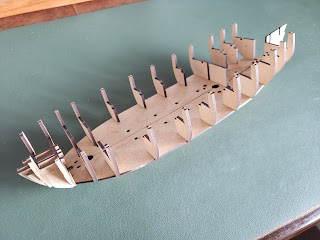 You can see a number of extra pieces that slot into place at the bow, to make it easier to anchor the planking around the tighter curves there. Then the deck supports are glued in place, running across and down the length of the hull. These pieces also help make sure the bulkheads are properly aligned. 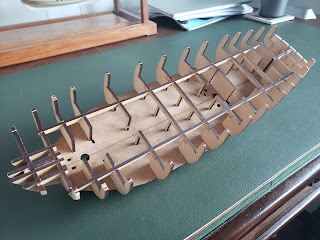 Here you can see the false upper deck in place. It is laser cut from some thin but very tough plywood. Eventually it will get covered with another layer of wood to replicate the deck planking. At the stern you can see the supports for the transom. 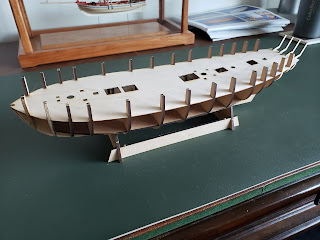 And here is a shot of the transom pieces being clamped in place while the glue sets. 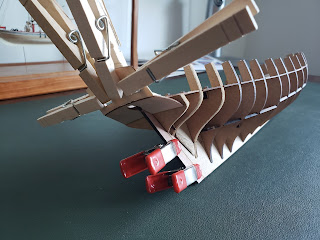 At the bow the inner stem is glued in place. The slots in it will make it easier to anchor the first layer of planking. The sides of the bulkheads need to be fared, or beveled, to enable the planking to sit flush against them. This a time consuming process, but is essential to getting smooth curves in the hull. 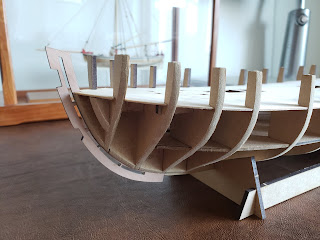 Next the gunport patterns are glued into place along the sides of the deck. These are thin plywood pieces, and were soaked in boiling water for a while to make them more pliable. Fitting them was definitely the most challenging step of the model so far, as they have to follow a complex curve. They didn't come out perfectly, but between sanding and later covering them in planking, inside and out, errors and imperfections hopefully will not be too visible. 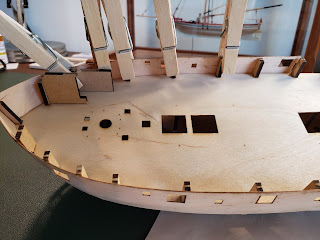 Here you can see all of the gunport patterns in place. The model is starting to take shape! Next up will be the beginning of the first planking layer. 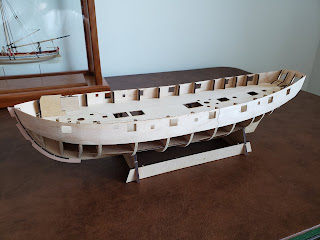