This is the USS Wasp, an American 20 gun (including the stern chasers) sloop of war, and a lovely 1/300 scale model from Langton. She still needs a fair amount of work - most importantly the weathering of the sails, which adds a lot of dramatic effect, but also the crew needs to be added, the anchors painted, anchor chains added, and flag and pennant, and some more blocks - but I wanted to post the model as a work in progress.

The water that the ships sits on is the resin offering from Langton, and then I've mounted the whole thing on an mdf base, which has a clear acrylic display cover that fits over it. 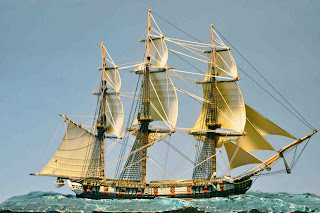 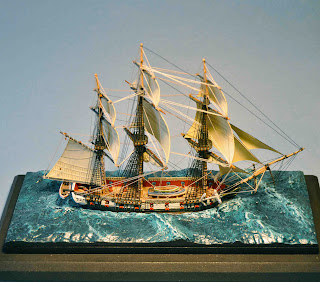 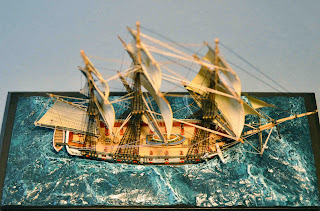 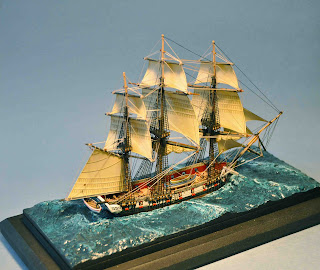 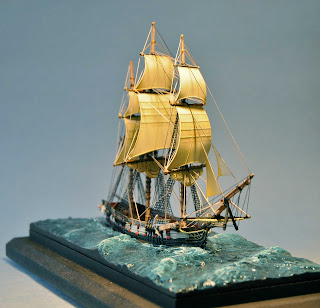 The latest figures I have completed are Relic's Gallic Veterans. I've added the command figures to the mix, and you can see a variety of views of them below. Shield transfers are from Battle Flag, and they are on 20mm Lithko bases. 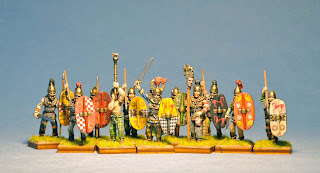 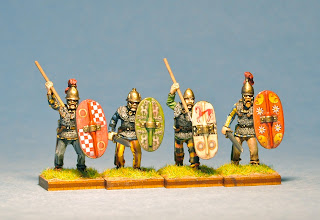 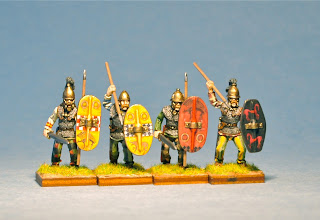 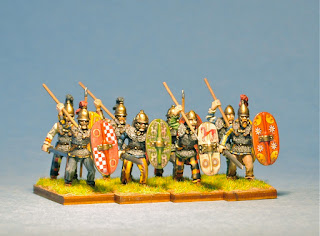 Langton 1/1200 Brig of the Napoleonic era

The latest ship model I've completed is a 1/1200 scale two masted brig of the Napoleonic era, from Langton. Another fun project, and I enjoy packing as much detail as I can into these tiny models. Langton's kit has a ship's boat molded in to the deck of the brig, as some of their other models in this line do, but they tend to be rather out of scale. So I added a boat from GHQ over it (these boats were sometimes stacked one on top of the other in reality) and another hanging off the stern, under little davits that I made from pieces of the carrier the brass sails came on. I also added GHQ anchors. 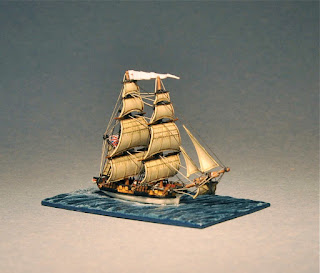 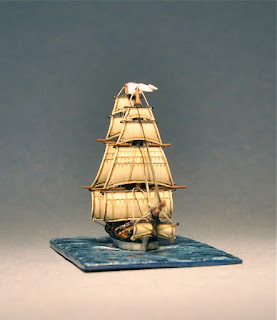 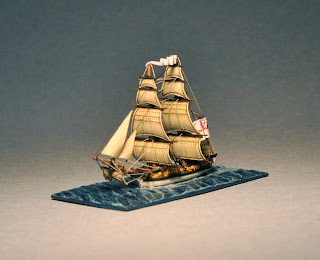 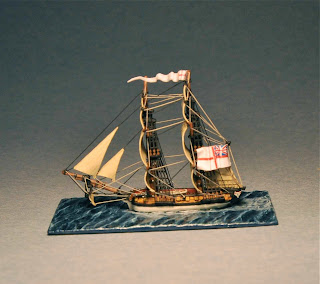 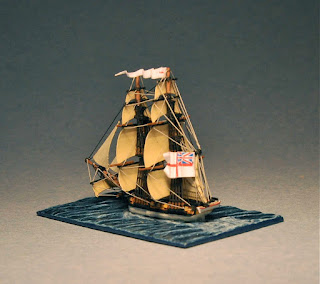 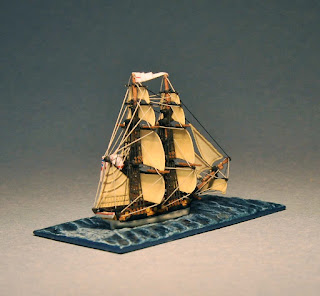 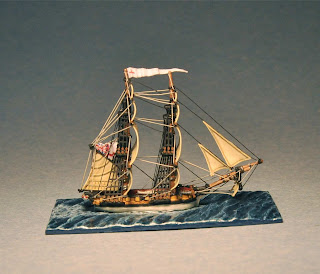 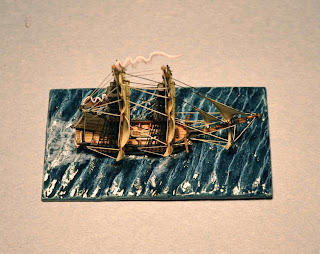 Here for comparison are a couple shots of the brig next to a sloop, another Langton piece. 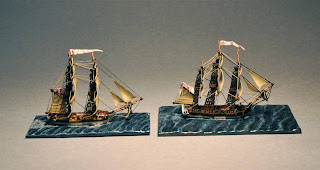 The sea bases are both from Langton, and you can see here that the brig is mounted on a smaller base, though it is not itself much smaller than the sloop. Incidentally these are not the sizes of bases recommended by the company. I prefer, and strongly recommend, to mount them on bases that are large enough to extend further than the bowsprit, for the safety of the models. 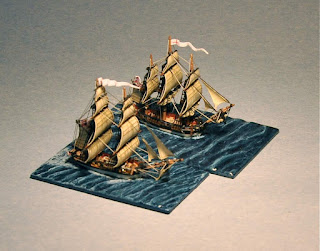 I've just finished Relic's Gallic Veteran Command, my first foray in to the world of Gauls who, it turns out, are a lot of fun to work on.  Lots of colors and interesting patterns, especially plaids. These figures have a lot of character sculpted in to them. Jacques for one, over there on the right, seems to have taken up a rather grisly hobby. You have to wonder what his friends and family think of that.

The shield transfer is a decal from Battle Flgas (http://www.wargametransfers.com/gallic--celtic-shields.html) and can be purchased on Relic's website along with the figures. I had not used these before, having experience only with LBM transfers. It didn't take me too long to get used to these though, and I am very pleased with them. They have the excellent benefit of remaining moveable for a little bit after they have been applied, so they can repositioned if you have something misaligned. I like to cut them in half and apply the two parts as separate pieces, then paint up the gap of the the shield spine. 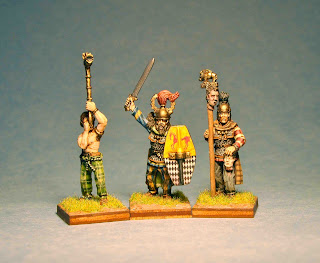 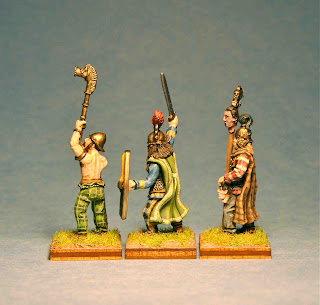 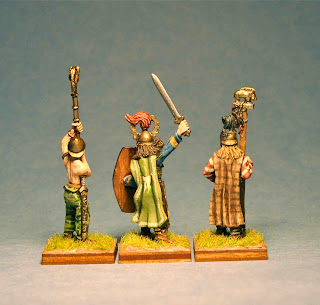 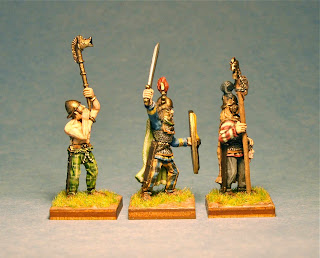 
This happy looking fellow is an Iberian chieftain in 25mm, from Relic. He carries a typical Spanish sword and the caetrati, a small buckler with a bronze boss, suited for close combat but offering little protection from ranged weapons. The Iberian tribes were renowned for their abilities to fight fast moving guerrilla-style engagements, which frequently gave the Romans so much grief, and a very small lightweight shield would be a good choice for such tactics. The disc armor over his chest is typical of a well-to-do Spanish warrior of his day, but boasts lavish silver ornamentation showing his status as a chieftain.

Another crisply sculpted creation from Relic, and a joy to paint! 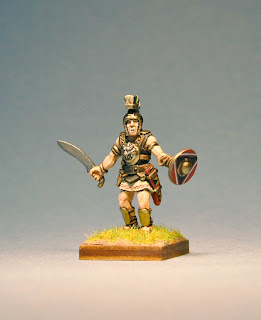 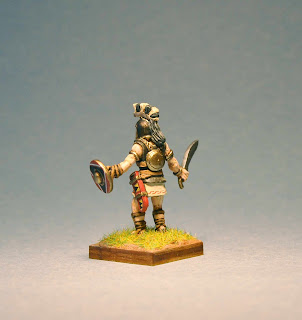 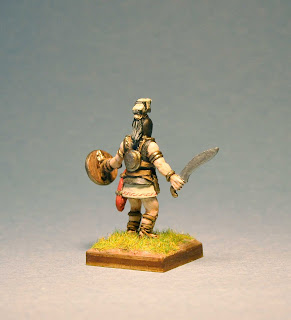 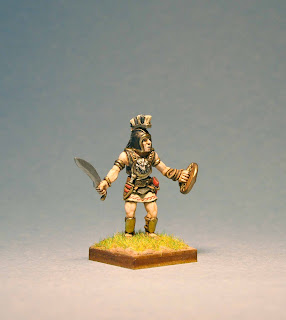